The Twelve Tribes sect is currently under investigation for igniting one of the most destructive fires in Colorado state history.

This expansive fire, later coined “The Marshall Fire”, set over 1,100 homes ablaze in Boulder County on Dec. 30, 2021–  a catastrophic event that would not be easily forgotten by Superior and Louisville residents.

The Boulder County Sheriff’s Office (BCSO) and Denver FBI have combined forces with the U.S. Forest Service to investigate where the fire started.

Investigators have narrowed the ignition point down to two locations: One on the Twelve Tribes compound and the other at the Marshall Mesa Trailhead. Back in December of 2005, a smoldering coal mine that lies under the trailhead sparked a small wildfire in the area and has been on Boulder County’s radar ever since.

Zoltowski told the Denver Post the 100 mph winds nearly knocked him over on his way to the Eldorado Springs Drive compound. Upon inspection, he saw two younger men carrying an older man. After Zoltowski confronted them, the younger Twelve Tribes members told him the older man had broken his arm and that one of their dwellings had caught on fire.

Shortly after, Anjan Sapkota captured a video of a dilapidated shed in flames on the Twelve Tribes property at 11:51 a.m. on Dec. 30 while passing by in their car.

A park ranger’s report of the Marshall Fire corroborated both Sapkota and Zoltowski’s stories.

Emergency dispatch was called to Highway 93 and Marshall Road after someone reported seeing smoke, possibly from a down power line.

Kelly McBride, a ranger for Boulder Open Space and Mountain Parks, responded that she was in the area when the smoke was reported at approximately 11:08 a.m. After McBride and firefighters checked where Highway 93 and Colorado I-70 intersect, also known as Eldorado Springs Drive and sometimes referred to as Marshall Road, no smoke was apparent. Instead, there was a down communications cable.

Upon inspection, Michelle Aguayo, an Xcel Energy spokeswoman, told 9News that, “nothing we have seen at this point in the investigation leads us to believe that our equipment’s operation ignited the fire.”

The ranger documented that at 11:20 a.m., a ground fire started on the Twelve Tribes property and at 11:32 a.m., their shed was ablaze.

Upwind from the Twelve Tribes near the Marshall Mesa trailhead, McBride noted in her report that a second plume of smoke rose from the southwest side of open space land at noon.

In a press conference on January 3, 2022, Boulder County Sheriff Joe Pelle acknowledged the viral video posted on Twitter by Sapkota:

“There was a viral video that was posted of a shed on fire. We don’t know that that shed started the fire or whether it was secondary,” said Pelle.

When a local reporter inquired if Boulder’s Twelve Tribes property was involved in the Marshall fire investigation, Sheriff Pelle confirmed that, “it is, and it will be and that’s widely known and understood. So is the area around it.”

Pelle continued to disclose more specifics about the search warrant for the Twelve Tribes property and the neighborhood surrounding the sect’s compound.

“It’s an open investigation,” said Pelle. “​​We’re going to do it right, it’s gonna take some time. You’re gonna lose your patience. We’re going to get the right people with the right expertise. The snow is going to melt. We’re going to take our time and be methodical because the stakes are huge.”

The Community in Boulder

The Twelve Tribes community lies on the outskirts of Boulder, right in the University of Colorado Boulder’s backyard. Located at 5325 Eldorado Springs Drive, the compound consists of multiple buildings, each of which has a designated purpose within the community. Excavation equipment lies near the garden facing the Flatirons.

Back in 2019, Twelve Tribes and its affiliated restaurant on Pearl Street, the Yellow Deli, were at the center of a CU Independent investigation.

Since then, the pandemic has taken a colossal toll on the Twelve Tribes.

Members are leaving rapidly and en masse. Four members who preferred to remain anonymous to avoid reprisal in their respective communities confirmed this.

“As soon as Gene Spriggs or Yoneq died of COVID, the influx of members started to dwindle. Powerful members are becoming more and more reclusive,” said John, an ex-member who agreed to speak to the CUI without the publication of his last name.

John was jostled from community to community as a child, recalling that he was often confused about where his true home was. The most prevalent memory of one was in Hiddenite, North Carolina– the training center for future and current tribal leaders.

The Twelve Tribes holds nationwide conferences at this location. John and another ex-member who prefers to remain anonymous resided in Hiddenite around the time Gene Spriggs became incredibly ill and was being housed there.

Their beliefs can be found on their website. They rely heavily on the Book of Revelations and prophesize that,

“The apocalypse has already begun and in 50 years they’ll raise 144,000 male virgins who will bring about the second coming of Jesus Christ or Yahshua as we more commonly call him,” said John.

The Community in Boulder declined to comment to the CUI on whether or not they were responsible for starting the Marshall Fire. They instead referred reporters to BCSO.

The CUI requested a comment from BCSO but they stated that commenting to the press at this point in the investigation would not be in the public’s best interest.

However, the Records Manager for BCSO, Rosemary Horton, released all previous calls to service at 5325 Eldorado Springs Drive before Dec. 30.

Dec. 30 isn’t the first time a fire was reported on the Twelve Tribes property.

According to the CAD police log, there were twelve calls to service for controlled burns and 13 fire-related incidents between January 26, 2018, and December 29, 2021.

A familiar face to CUI reporters, Joseph Fisher, who is also known as Dayag in the Twelve Tribes community, placed these calls to BCSO’s emergency dispatch throughout the years. Additionally, there were 4 calls to service for ‘child issues’, 2 calls for trespassing, 2 medical calls and a number of other miscellaneous calls to service for welfare checks, and noise complaints.

Fisher declined to comment on the twelve controlled burns he reported to BCSO dispatch. The CUI sent multiple requests for comment via phone and email.

Fire Management Officer for BCSO, Seth Mckinney, noted that controlled burns do not occur too often. In attempts to mimic the natural and historical fire regime, that means a controlled burn should take place in the Front Range once every 7 to 10 years.

“A resident can burn 49 piles under safe conditions before needing a smoke permit. If an individual were conducting a pile burn and it got out of hand, we would want them to call 911,” said Mckinney.

He also confirmed that controlled burns should not be reported to emergency dispatch unless the fire needs to be contained by law enforcement.

Regardless of past allegations against the Twelve Tribes, Pelle advised that the public should avoid jumping to conclusions regarding the fires’ origins since,

“The investigation is still in the early stages and could take weeks, possibly months longer,” said Pelle.

BCSO sent out a press release on March 31 about the Marshall Fire investigation and its projected timeline.

Although the sheriff’s office declined to share specific information, they broadly mentioned why the investigation will be a lengthy process:

Court proceedings and the investigation has been hindered by a class-action lawsuit.

Local law enforcement has yet to confirm the cause and origin of the fire. The Marshall Fire investigation is still ongoing, and for now, no conclusion has been made.

The search warrant for 5325 Eldorado Springs Drive is still active. 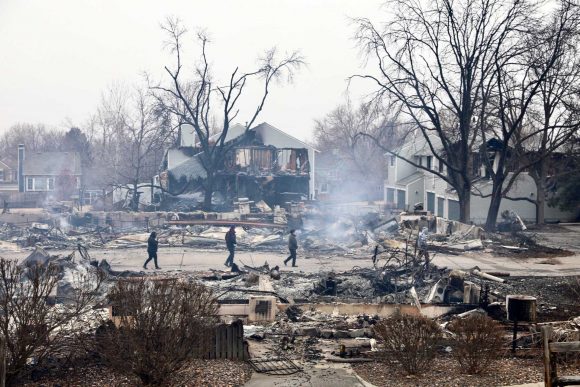 Damages from the Marshall and Middle Fork fires are seen within a residential area Dec. 31, 2021. (Io Hartman/CU Independent)

The Teachings form the body of scriptural understanding from Eugene Spriggs to be taught and observed by every member in all of the locations. They are not meant to be for the public and are presented here for research purposes … END_OF_DOCUMENT_TOKEN_TO_BE_REPLACED