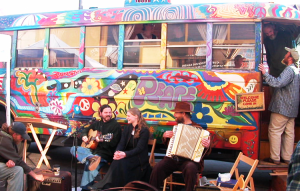 Cult is an ominous word. Conjuring up images of glass-eyed devotees and ecstatic rituals, for most of us it’s a pejorative term used to describe unusual spirituality. But if you ever ask what actually constitutes a cult, chances are you’ll have a hard time coming up with an answer. To some people, a cult’s only a cult if it’s a tiny group of acolytes following a megalomaniacal leader. To others, even mainstream religions like Christianity, because they influence the way people think and act and focus reverence on a set of esoteric leaders, dogmas and rituals, ought to be labeled cults.

This ambiguity stems from the fact that cult is a wishy-washy word of many real meanings. But it is possible to hybridize these definitions into a comprehensive, three-pronged one. 1. Theologically, a cult is essentially a spin-off of an existing faith or concept, using some but rejecting other mainstream doctrines to become a new faith. 2. Sociologically, cults break cultural taboos. 3. Colloquially, cults are typically small, centered around one venerated figure, and thick as thieves. Yet although cults are united in their seeming strangeness, they vary drastically in their risks and radicalness. Some cults are benign; some are malignant. Some are powerful; some are weak. Some hit a nerve and spawn their own progeny; some are just theological dead ends.

In A Cult A Day, we’ll be briefly highlighting the width and breadth of cults across the world, moving past the glitzy, demystifying the label and trying to learn some lessons along the way.

In part seven of our A Cult A Day feature, we look at the Twelve Tribe movement, a seemingly new age group of quasi-Christians accused of brainwashing and isolating their cowed commune members.

Attentive concertgoers may be familiar with the Twelve Tribes movement (also known as the Northeast Kingdom Community Church, the New Apostolic Order in Messiah, the Church in Island Pond or just the Communities) by look if not by name. As far back as the 1980s, this group of quasi-Christians used to follow the Grateful Dead in their own tour bus. Dressed in hippy-dippy garb, they’d offer people a place to meet up with their friends and to come down from bad acid trips. Today they offer similar services at Bob Dylan concerts and other folksy music scenes.

But in addition to their services, they’d offer literature, interpreting singers’ lyrics in terms of a utopian Christian theology. They’d try to sell people on the idea of forsaking their material goods to come and live on a spiritual commune, working in cooperation and achieving a profound sense of peace, community and happiness—not to mention eternal salvation. And every now and then, they’d spirit off a concertgoer taken in by their rhetoric, many of who were never seen again by their families, with whom they could not communicate.

The Twelve Tribes movement is the brainchild of Eugene Spriggs, an ex-high school guidance counselor and carnival showman from Chattanooga, Tennessee. In the early 1970s, Spriggs reportedly got involved with the Jesus People Movement (whose members were called Jesus Freaks), which was essentially the hippie wing of charismatic Protestant Christianity, stressing the restorative power and wonders of god with a liberal bent. But sometime around 1972, Spriggs decided that he was more aligned with a strictly Old Testament view of the world, deciding that the old Hebrew blueprint for society was the correct way to find peace and justice in the world. Taking the name Yoneq and declaring himself a new age prophet (or Super Apostle), he started preaching the creation of biblically influenced and egalitarian communes, which would interact only within themselves to create a new utopia, reviving the twelve tribes of Israel (hence the name) and ushering in the return of Yashua (their name for Jesus), when they would be saved.

As Yoneq’s community coalesced, formed of seekers who agreed with his vision of the revival of what you could call Old Testament new age communalism, his theology became more developed—and strange. All members took Hebrew names and lived by shunning modern technology and practicing a strictly patriarchal form of marriage, in which women, needing to atone for the sins of Eve, were totally subject to men. They worked long days of prayer, farm labor, home schooling for the children, and did all of this without any contact with the outside world, including their own families, who were seen as part of the sinful secular reality that needed to be rejected. More randomly, Yoneq took a selective disliking to things like shaving, wristwatches and caffeine, but promoted the use of chopsticks, flax seeds and cultured foods like yogurt, supposedly as part of his belief in the influence of food on the body—and in the case of the chopsticks his conviction that he needed to spread his word to Asian followers. How using chopsticks was supposed to bridge vast cultural gaps on its own remains unclear to most.

How It Went Wrong

Like many cultic leaders, Yoneq knew his marks well and with just the right degree of charisma and cunning managed to create an empire of communes, all of which provided free labor to his many business ventures. By some counts, his community owns two dozen businesses worldwide, staffed by perhaps 3,000 followers spread across 50 communities in nine countries, mostly in the U.S., Europe and Australia. As of 2012, tax records suggested that their assets amounted to at least $26 million; Yoneq, the all-powerful Super Apostle, directly controlled most of that cash.

But this empire was built not so much on pure charisma so much as on authoritarianism and coercion worked upon those whom Yoneq and his acolytes had roped into their communities. Although at first the communes were supposedly very egalitarian places devoted to lofty ideals, after a string of bad press and a move to a new home base, Yoneq increasingly played the role of the strong man and hermitic ruler (although ostensibly maintaining rule by an apostolic council of commune members), issuing more aggressive and bizarre proclamations throughout the 1980s. The pipeline to god living off in his own mansion while his followers toiled away in comparative poverty, he set up a near-Orwellian system of monitoring, assigning all members a shepherd, an older and pro-establishment mentor to watch and guide their every motion. Every day members had to confess their sins—anything that deviated from Yoneq’s will—knowing in their hearts (as affirmed by constant repetition) that failing to disclose their shortcomings would result in god turning away from the community. The fear and paranoia of heavy monitoring rapidly turned into compliance, as people either bought or were brainwashed into fervent belief.

Yoneq’s commandments became especially troubling for children as well. He was (and is, Yoneq is alive and well, if aging and reclusive) convinced that children needed to be completely compliant and docile creatures in order for them to be sinless. To hear ex-followers tell it, he apparently declared that the community needed to produce 144,000 perfect beings in order to usher in the end of times and their community’s salvation. And in order to do so, children had to be beaten into submission and perfection from an early age. Rampant cases of abuse, and evidence of racist indoctrination (Yoneq reportedly hates black people and sees multiculturalism as a sin) have led to raids on Twelve Tribes communes in America, France and Germany, although few have been successful in closing down the communities or even proving wrongdoing towards traumatized children.

These abuse cases, combined with the Tribes’ well-known proclivity towards isolating new members and keeping their families from seeing them, have soured much of the world on Yoneq’s once-utopian ideals. Now most outsiders are fairly convinced that these communes are sites of intense brainwashing, intimidation and unassailable abusive labor and indoctrination.

Why People Followed The Cult

Unlike most cults whose dark secrets come out in the tabloids, the Twelve Tribes never really hemorrhaged too many members throughout their scandals. And they still manage to draw in new members all the time. Most of these people are likely drawn in by the promise of community and a back-to-the-earth, back-to-our-roots ethic of spirituality. Initial visits to the communes, and their official materials, are usually full of happiness and affirmation, selling potential recruits on the reality of the movement’s original utopian visions. It’s a great sales pitch, bolstered by the robust ability of the movement to escape serious prosecution or police crackdowns worldwide—surely if they’ve survived scrutiny they must be okay. But it also helps the membership numbers that once you join the Twelve Tribes, it can be very hard to get out. In fact, it can be very hard not to find yourself slowly coerced into deeply believing in Yoneq, embracing your new life as the only way to salvation, and really as your only available option.

What It Tells Us about Cults

The Twelve Tribes movement is in part your standard story of a utopian ideal corrupted by time and the increasing megalomania of a charismatic founder with problematic ideals. It’s a textbook example in how cults can manipulate people’s longing for community and spirituality into recruitment. In that sense, it looks a lot like other cults featured to date in this series. But what it has over all the other cults is a reputation for brainwashing. It’s a prime example of how control and isolation can be used to create followers, something practiced in less extreme forms in other groups. And in its notorious child abuse scandals, it’s a prime example of how the sincere, perhaps even honest and uncoerced beliefs of a family in a cult are rarely in the best interest of children, who ought to be granted the inherent right to choose for themselves, free of abuse and indoctrination, whether they want to believe in the same mumbo-jumbo as their parents do. The ability of cults like the Twelve Tribes to rob children of that agency is perhaps one of the more despicable things that they are capable of. And they do it all too often in greater or lesser ways.

The Teachings form the body of scriptural understanding from Eugene Spriggs to be taught and observed by every member in all of the locations. They are not meant to be for the public and are presented here for research purposes … END_OF_DOCUMENT_TOKEN_TO_BE_REPLACED