Twelve Tribes.. Inside the cult that canes kids

Source: The Sun: Twelve Tribes.. Inside the cult that canes kids
Sun report on the sect mired in controversy 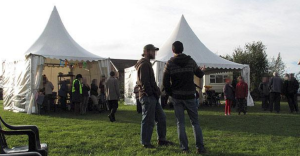 EXCLUSIVE
By RACHEL HALLIWELL
Pictures by ADAM GRAY
Published: 15th October 2013
On a small stage in a converted barn in rural Devon, 11 children perform a play for family and
friends.
They could easily pass as kids in a school production, stumbling over their lines and nervously avoiding eye
contact with their audience.
But these youngsters do not go to school and are at the centre of a huge controversy.
The reclusive community they live in — an off-shoot of a 3,000-strong US-based religious cult — is facing an
inquiry into alleged physical abuse.
As members of the Twelve Tribes sect, their parents believe God wants them punished for misbehaving by being
hit across their backsides with willow canes.
Last month the NSPCC called on local authorities in Devon to investigate the possibility this goes far enough to
be considered child abuse — putting the 40 adults and children living together at Stentwood Farm under close
scrutiny.
It follows raids in September on two Twelve Tribes communities in Bavaria, Germany, when police and social
workers took 40 children into foster care after an undercover journalist filmed youngsters being beaten with
sticks.
Now, Devon County Council is carrying out its own enquiries into what goes on at Stentwood Farm. 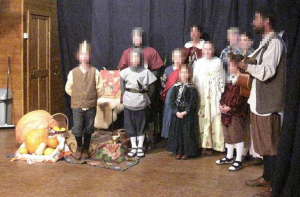 Last weekend photographer Adam Gray and I paid a visit, posing as passers-by who had stumbled across the
place, to see at close hand what life is really like at the commune.
The group was holding an “Apple Day”, where locals are invited to bring fruit to be pressed and bottled, eat
home-cooked food and be entertained with music, dancing and a play performed by young members of the sect.
The event is advertised on the group’s website, along with an insistence that, despite current controversy, the
commune holds its doors permanently open to visitors.
“We have nothing to hide, and the fruit of the way we raise our children can be observed by anybody who wishes
to know,” it states.
But that open invitation does not, it would seem, extend to journalists.
Adam and I arrived at the farm just as a police van turned up, apparently called by Stentwood Farm having just
discovered two male reporters among them.
The police looked on as a senior Twelve Tribes member accused the journalists of trespass, insisting that they
leave.
As they did, Adam and I were asked by other members why we were there. In no doubt we would also be sent
away if we revealed our true identities, we stuck to our cover story. We said we were visiting a local airfield and
had spotted signs for the farm’s tearooms while looking for somewhere to eat.
Satisfied with our explanation, they pointed us to a field surrounding the rambling farmhouse where the group
lives. Here we found simply dressed men, women and children — many in old-fashioned looking smocks —
dancing in a circle.
Pizzas were cooking in a wood-burner, there was a craft stall where little ones were making clay models and
building small constructions with chickpeas and cocktail sticks. Elsewhere, locals were lining up with apples they
had brought from their trees at home for their hosts to turn into fresh juice.
On the face of it, this seemed like any other country festival. Only it soon became clear that everyone there was
either a member of the sect or people they know and trust.
Adam and I found ourselves repeatedly questioned by men of the group.Bearded, and with their long hair tied back, they call themselves shepherds — and wanted to know why we were
there and what we knew about them.
The quizzing was intense but unsurprising considering the stress they must be under as their way of life is
subjected to public scrutiny. 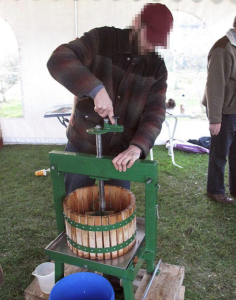 Pressed … fruit is juiced on farm
And like accomplished politicians, they firmly batted away any questions we asked about the set-up at Stentwood
Farm, with a further barrage of questions about our own backgrounds.The female members were far more forthcoming, talking openly about how they raise their children. One told me
they home-school so their young are not tainted by the consumerism of the outside world. They follow their own
curriculum, focusing largely on learning about the natural world.
“This way our children can grow up with ‘pure pressure’ instead of peer pressure,” she explained.
“We don’t have computers or televisions. They aren’t brainwashed into thinking they need to own the latest
trainers or whatever the latest fashion is in clothes. It’s much better for them.”
The group funds its way of life by selling the bread it bakes at markets and festivals. On-site tearooms also
provide an income. They grow much of their food and are self-sufficient.
But beyond selling loaves with adults from the commune, the children have no opportunity to explore the world
beyond the farm.
I asked another mother whether she worried her son, aged nine, was missing out on normal social interactions
outside of this tight-knit circle. “Not at all,” she insisted. “He has everything he needs here and is very happy. How
would trips to McDonald’s and spending time with children obsessed with computer games and MTV make his
life any better?”
But, tellingly, she added: “Our children are never left alone. From the moment they wake until they go to sleep,
there is always an adult with them.
“If you leave two children alone together they will get silly. They’ll egg each other on and fool around. They might
get into mischief.
“If they always have an adult guiding everything they do then this doesn’t happen.”
But surely fooling around and getting into scrapes is a natural and important part of child development?
“No,” she told me firmly. “Children are like apple trees — they need to be pruned so they can grow tall and
straight.
“They should always have someone older and wiser alongside them, keeping them busy so it doesn’t even occur
to them to be silly or misbehave.” And if that doesn’t work and they still play up? At this point she clammed up,
some urgent business elsewhere pulling her away, leaving me to assume this is where caning might arise.
It is something Twelve Tribes makes no apologies for on its website, stating: “We love our children and consider
them precious and wonderful.
“Because we love them we do spank them. . . When they are disobedient or intentionally hurtful to others we
spank them with a small, reed-like rod.”
Having seen the children at Stentwood Farm for myself, there is no doubt they are deeply loved and well cared
for. They are beyond polite and respectful.
I observed genuine warmth between them and the adults they live with. These people were also generous and
kind to us.
But as a mother who would not raise a hand to my three children, let alone whack them across the bottom with a
wooden stick, I cannot reconcile myself to the way these youngsters are disciplined and their freedoms restricted.
At no point did I see children playing wild and free in the safe green fields surrounding their home. There were no
secret hedgerow dens nor kids larking about away from the adults.
Just as we had someone at our shoulder wherever we went on the farm, so do these youngsters, day in, day out.
So I would imagine they rarely do feel the sting of a wooden stick, because I cannot see what opportunities they
get to be naughty.
When I asked what happens when these children become teenagers — surely some must rebel — I was told
rejection of this life happens rarely. And when it does?
“We let them go. But most of them come back again, because they realise they don’t want to be part of the world
outside.” At the end of the afternoon we were invited to watch the children perform in a play — a morality tale that
taught the audience how much God loves the meek.
Meek is certainly how I would describe the children at Stentwood Farm. Unfortunately, that seems to be a
permanent state for them.
And my biggest fear is that if they cannot act freely at this tender age, what hope is there that they will ever feel
free to leave the cult their parents chose to join?
Devon County Council confirmed that reports of abuse at Stentwood Farm are “being looked into”.A spokesman said it was “too soon to say” if a full-blown investigation would occur. “We are looking into it to see
if there is anything that needs investigating,” he added.
John Cameron, the NSPCC’s head of child protection operations, confirmed the charity is concerned about
reported practices at Stentwood Farm. He said: “We are asking for the local authority to look into those concerns,
which we are satisfied they are now doing.”
How clan grew to 3,000 members 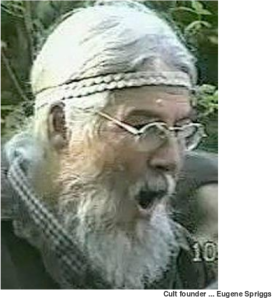 TWELVE Tribes is a Christian fundamentalist group founded in America more than 40 years ago by Eugene
Spriggs .
Now 76, he set up the first commune in Tennessee. It later moved to Vermont, and from there sent out
missionaries to start others in Europe, Australia and South America.
Twelve Tribes now has around 3,000 members. There are settlements in Germany, France, Spain, the Czech
Republic, Australia, Argentina and Canada.
On joining, members must hand over all they have of value and abandon their birth names. Their possessions
are sold and used to support the group and they are given ancient Hebrew names.
The community at Stentwood Farm was created 15 years ago.

The Teachings form the body of scriptural understanding from Eugene Spriggs to be taught and observed by every member in all of the locations. They are not meant to be for the public and are presented here for research purposes … END_OF_DOCUMENT_TOKEN_TO_BE_REPLACED