They have racy nicknames such as The Whip King and Pistol Pete and they pose in “shocking” and “insane” manoeuvres for a show suggestively titled Xtreme Korruption. 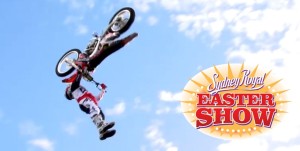 But as thousands of screaming children and their parents can attest, it’s all in the name of G-rated family entertainment.

Freestyle motorbike champions, BMX stunt riders and monster truck drivers took their toys for a spin at the SuperDome yesterday as the Royal Easter Show enjoyed booming crowds on the first working day of the school holidays.

Between the car-crushing theatrics of the 6.5-tonne, $250,000 monster truck and the twists and turns of the BMXs, the flying motorbike riders stole the show with heart-stopping mid-air tricks such as The Whip and the Indian Air Heart Attack.

“Yeah, The Whip sounds a bit like bondage doesn’t it?” said 25-year-old Ben Jones, known as The Whip King to his mates.

“I certainly didn’t come up with it – I could have done a better job than that.”

Almost 750,000 had made the trip to the Show by yesterday morning, more than half of them since Good Friday. Organisers are predicting crowds will remain high for the last two days as families take advantage of the school holidays.

The Twelve Tribes, a strict Christian co-operative, was kept busy feeding the flock with its holistic alternative to pluto pups and fairy floss. 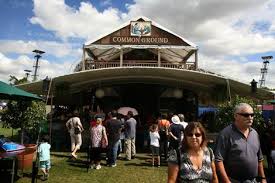 The group shuns material values and eschews junk food and other corrupting agents such as alcohol and television, but believes a commercial behemoth like the Easter Show is the perfect place to spread the message.

This year, for the seventh year running, the group’s food stall, the Common Ground Cafe, run by bearded men and modestly-attired women, was deemed best Show caterer for its gourmet pizzas and barramundi burgers.

“We’re not a wealthy people; we believe in living a humble life. We’ve always liked cooking and catering and it just grew out of that,” said Campbell Macklow, 38, a spokesman for the co-operative.

“We’re not a commune; that word gives you the impression of naked children running around and wife-swapping, and we’re not into that,” said Mr Macklow.

“We just believe in living a simple life.”

The Teachings form the body of scriptural understanding from Eugene Spriggs to be taught and observed by every member in all of the locations. They are not meant to be for the public and are presented here for research purposes … END_OF_DOCUMENT_TOKEN_TO_BE_REPLACED