Source: Hubpages.comThe Twelve Tribes: What You Need to Know

Who Are the Twelve Tribes?

A few years ago some differently dressed people began wandering around my small, isolated upstate city of Oneonta, NY. They bought a building. They parked the coolest-ever looking hippie bus around town. They bought a very large house. They bought another building and created a lovely restaurant on the Main Street four corners of town.

As a liberal long-haired type myself, I thought – well cool! But, the librarian in me needed to know more. So I did my research. And then, I educated my daughter.

New religions and cults spring up sporadically in our society, and on occasion one will root itself, gather members and begin to spread. So is the case with The Twelve Tribes, a religion formed in 1972 by leader Elbert Eugene Spriggs.

The Twelve Tribes is a fundamentalist, millennialist religion and chances are that unless you live in one of the few communities where they are embedded, you have never heard of them.

In the news this group is often described as a cult. Indeed, in Ithaca, NY, an awareness group was formed to both inform the public and help ex-tribe and community members affected by the Tribe’s practices. 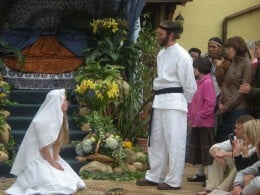 Facts About the Twelve Tribes

40 children rescued from allegations of abuse

The Twelve Tribes: In the News

Over the past 4o years, The Twelve Tribes has been in the news several times for allegations of child labor law violations and child abuse, both in the United States and abroad. Significant concern has been given to their use of resin-dipped balloon sticks (referred to as willow sticks) to discipline even very young children.

Bavaria, Germany
Most recently in Bavaria Germany, police raided and rescued 40 children – not the first time this sect has been charged with child abuse. But, it may be the first time a reporter has provided the courts with some video documentation to use as evidence. (Read more here).

In 2013, journalist Wolfram Kuhnigk went undercover in the tribe’s Bavaria compound, claiming to be a wayward soul. During his stay he managed to videotape secret and persistent basement beatings, verifying long-held suspicions. In the past, when charged with child abuse, little if any evidence has been found, leaving the courts to return the children back to their families.

New York
In 2001 the group faced charges of violating child labor laws when The New York Post claims to have broken a story concerning the employment (or forced labor) of 13 and 14 year old children on the factory floors. A later investigation yielded a $2,000 fine of the group’s employment of two 15 year old boys who were workers in a soap factory owned by the tribe.

Group leaders emphasize that their children work “alongside” them. “Our work and life is mixed together. We teach our children to work. I teach my sons to work. It’s not like labor.” (N.Y. officials fine Twelve Tribes)

The Washington Post suspects that an early breaking news story alerted the group to impending investigations. No other minors were found in the factories.

The biggest concern we should have about this group is their often malevolent treatment of children. Certainly, there are religious groups who operate outside the mainstream in terms of child rearing. What defines a cult? What invisible line must be crossed for us as a society to no longer tolerate a group’s behavior?

In an interview that two undercover journalists managed to secure in Glasgow, England earlier this year, a Twelve Tribes mother explained their parenting ideology this way:

“He has everything he needs here and is very happy. How would trips to McDonald’s and spending time with children obsessed with computer games and MTV make his life any better?”

But, tellingly, she added: “Our children are never left alone’. From the moment they wake until they go to sleep, there is always an adult with them.

“If you leave two children alone together they will get silly. They’ll egg each other on and fool around. They might get into mischief.

“If they always have an adult guiding everything they do then this doesn’t happen.”

But surely fooling around and getting into scrapes is a natural and important part of child development? “No,” she told me firmly. “Children are like apple trees — they need to be pruned so they can grow tall and straight. (Twelve Tribes…..)

Those who have left the cult report basement isolation for weeks at a time; denial of food; threats of physical punishment if they did not comply or make admissions of sin. 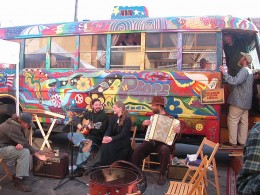 Perhaps one way to identify a cult is to listen carefully to the stories of those who have left, as well as to examine a group’s practices in recruiting new members. For the Twelve Tribes, to join the group is to separate entirely from family and friends, including children and spouses. What is it like upon re-entry? What are the experiences of children raised in the Twelves Tribes when they return to mainstream society?

Read more about this group in article 2: The Twelve Tribes: The Peacemaker and The Redeemed

The Teachings form the body of scriptural understanding from Eugene Spriggs to be taught and observed by every member in all of the locations. They are not meant to be for the public and are presented here for research purposes … END_OF_DOCUMENT_TOKEN_TO_BE_REPLACED