The Twelve Tribes (WWOOFers in France)

or look at complete article posted here on our website

We did some woofing in a “community” . After a warm welcome by the charismatic leader, we gradually realized that it was a real cult. All people have Hebrew names, beard (for men!) A scarf (for women) and a diadem on their heads.

The first days were rich in emotions and many fits of laughter. We were surrounded by illuminated who believe that their community, protected from the outside world which is in full decadence, was the most marvellous place on earth and that they would succeed in convincing us to stay.

Photographing was prohibited during the ceremonies , so we will not be able to share these great moments: when illuminated traditionally dance on Hebrew songs, everyone thanked “our father Joshua (Jesus in Hebrew),” for having left that “disaster” (the outside world), and for sharing moments lived with their brothers and sisters (the other members of the community). After everyone raise their hands to the heavens and shouts “Thank you Joshua”. We cried because it was so hilarious (indeed they were not too happy about it).

The schedule was very strict: getting up at 5 am, the ceremony preparation (shower getting ready), ceremony at 6 am, breakfast at 7 am, work in the garden from 8am to 12am, lunch at 12am, dishes and help cooking until 4 pm, 4 to 5pm work in the garden, 5 pm: preparation for the ceremony, ceremony, still a little gardening, dinner, sleep … (shower again!). and once more !

No time to think, no time to read … Besides the only book present in the community was the Bible.

We asked them many questions : why you do not read other books? why don’t you ever go out? don’t you feel that you are lacking freedom? etc ….

And everytime the answers revolved around God, their happiness in the community and the complete rejection of everything that comes from the outside world.

In the end, we thought that these people are happy and good for them because before entering the sect most of them were poor, and / or on drugs, etc … At least they found a very healthy lifestyle ( organic food, no drugs, no alcohol …).

However the education of children didn’t seem right.  The schooling is organized by the women of the community, children work in the garden, cooking, and playing football on Sunday for the boys, they participate in all ceremonies and quote the Bible by heart ….

We had trouble accepting the lack of freedom, the illuminated were constantly after us all day because we had to hide to read, or just to have a private quiet conversation and then we tried to miss the ceremonies …which proved impossible as they came to get us. 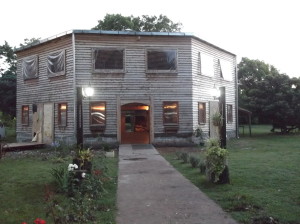 One Comment On “The Twelve Tribes (WWOOFers in France)”

The Teachings form the body of scriptural understanding from Eugene Spriggs to be taught and observed by every member in all of the locations. They are not meant to be for the public and are presented here for research purposes … END_OF_DOCUMENT_TOKEN_TO_BE_REPLACED