The Twelve Tribes Part 2: The Peacemaker and The Redeemed 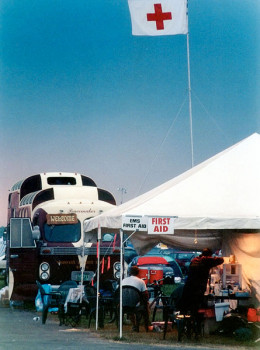 When the Twelve Tribes first moved to my city, I had no idea who they were. I noticed a group of groovy looking folks building a restaurant. The men all wore pony tails and beards, flannels and khakis. The women looked a bit more traditional, but nevertheless peaceful in long dresses, long, scarved hair, and billowy pants. They looked like people you’d see at a Dead Show.

“Oh, they’re the Twelve Tribes,” a friend said. The whosits? I watched as their hippie bus, the Peacemaker, drove into town and delivered more pony tailed and long haired folks. I watched as their young sons hammered and nailed and powertooled our city’s newest restaurant, the Yellow Deli, together.

Some of the first sources I came upon in my research were produced by those who have fled or who have had family members disappear into the Twelve Tribes. There are stories of people who report being ‘recruited’ at rock concerts, stories of those who had to leave their children behind with the group, and more startlingly, parents who had left their children behind to join the group. And, there are the stories told by adults who experienced child abuse at the hands of cult members.

These are the stories of those who describe their first impressions of the group as vastly disparate from the lives they came to live later.

Is the Twelve Tribes a Cult?

Merriam-Webster describes a cult as “a small religious group…that has beliefs regarded by many people as extreme or dangerous.” Most dictionary definitions reference an excessive devotion to or adulation of one person. Cults are also unorthodox and are not part of larger or recognized religion. Often they have established means of recruiting new members.

You be the judge.

“If you leave…you will become a homosexual.”

Let me add one additional preface. This is not a balanced article on this group. It is, however, deeply researched. I have included an extensive list of sources.

“If you leave: Lightning will strike you. You will become a homosexual.”

James Howell was Sprigg’s third in command for many years, serving as the Tribe’s secretary. His story is perhaps one of the most well known by those researching the Twelve Tribes. He recalls in a lengthy interview how members are made to live under fear.

After Howell left the group, his teenage son contacted him and made arrangements to also leave. On the way home, his son turned to him and asked: “Dad, am I going to be a homosexual now?” This is a common threat given to all members, and not one many of such devout belief would wish to come true.

The Example of Abraham

Another well-known story is that of an anonymous ex-member who has posted his list of 89 reasons: “Why I Left Elbert Eugene Spriggs Twelve Tribes Communes.” Certainly first hand accounts are filtered through an individual lense, but much of the information given is reiterated throughout stories found elsewhere.

Anonymous reports that after his wife and six year old son left the Tribe, he was unable to gain permission to see his son. It was explained to him that he both needed to mature in his belief and that his son would only grow more curious by his absence, heightening the chance that his son would one day come to join the group. Indeed, this young father was directed by several members: “You must follow the example of Abraham and place your son on the altar. You must reckon Jason as dead, just as Abraham reckoned Isaac dead.”

Twenty-five years ago Robert Robergs, his wife and infant daughter spent six weeks living in the Tribe’s Chatanooga commune. Robergs makes a clear statement that he believes the tribe to be a cult. Indeed, throughout their literature the Tribe claims that they are the only true Christians. According to the Tribe, the modern, American version of Christianity is evil.

During their stay, and what ultimately prompted them to leave, the Robergs witnessed regular beatings of children.

“All the people in the nursery carried these switches from trees,” he said. “They were extremely, extremely severe about any child who looked crooked. You didn’t just switch them once, you switch them until, they call it ‘breaking the spirit’. She saw some babies just being switched and switched and switched. She started saying ‘We’ve got to get out of here; this is not healthy.” (Twelve Tribes)

I Had to Sneak Out to Leave

Zeb Wiseman left the Twelve Tribes in 2001. He was born and raised within the confines of the group. He is the son of Eddie Wiseman, the second in command to Eugene Spriggs.

In an article published in The Boston Herald, Wiseman recalls years of physical and mental abuse. He details daily beatings with balloon sticks and being “routinely locked in a room, on one occasion for two weeks.” During this time he was given only small amounts of bread and water each day.

Wiseman escaped the Tribe at age 18:

But when Zeb tried to leave, he said, one of the elders physically blocked his path. He slipped by the man, ran outside and hid under a porch while Coughlin [Kevin Coughlin runs an underground railroad for TT defectors] and an ex-member helping him argued with one of the elders. As Coughlin got into his pickup truck and started pulling away from the farmhouse, Zeb made his maddash for freedom.

“When he drove by, I jumped into the back of his truck,” he said. “I feel so free to be out. I feel like I’ve been in prison my whole life, because I have been.” (Wedge) 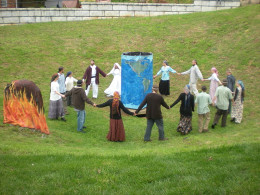 Life Within The Twelve Tribes: In a Nutshell

After reading countless interviews, personal accounts, and testimonials of past Twelve Tribes Members, I have come to believe the following about this group.

Breaking the Boundaries (n.d.). In The Twelve Tribes: The Commonwealth of Israel. Retrieved November 23, 2013, from http://web.archive.org/web/20030719181553/http://twelvetribes.com/publications/breakingboundaries.htm

Why We Boycott Maté Factor (March 6, 2009). In Ithacans Opposed to the Twelve Tribes Cult. Retrieved November 23, 2013, from http://www.iottc.blogspot.com/

The Teachings form the body of scriptural understanding from Eugene Spriggs to be taught and observed by every member in all of the locations. They are not meant to be for the public and are presented here for research purposes … END_OF_DOCUMENT_TOKEN_TO_BE_REPLACED