Island Pond is a small village within the town of Brighton; a quiet area where moose seem to outnumber people.

But in the late 1970s, Island Pond’s population began to grow quickly when a community church took root here.

Resident Debra Hawkins said, “I think they thought it was a cult. What’s going to happen here?”

It was shortly after the Jonestown Massacre– a mass cult suicide where more than 900 members died. So, when a new so-called “cult” settled in Island Pond, residents were uneasy.

“There was absolute paranoia,” said Bernie Henault of Island Pond. “There was fear. People were afraid.” 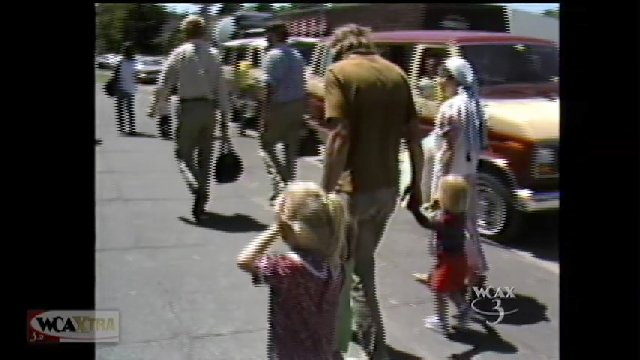 The Northeast Kingdom Community Church members share everything; all possessions, property, and money. They’re Christians– strong followers of Jesus Christ. Children are home-schooled and when they do wrong, the church believes in corporal punishment, sometimes using small rods and such to spank.

State officials began to get reports of children being physically abused by church parents shortly after the church moved to Island Pond– and in the summer of 1984– officials acted.

Nearly 100 state troopers and 50 social workers descended on the homes of about 400 church members early one morning and began rounding up 112 children.

“I was woken up in my room alone. They said ‘get up, get dressed, we are here to take the children,’” recalled Jean Swantko, who witnessed the raid.

Swantko was visiting a family at one of the homes raided.

“It was more traumatic for the parents because the parents knew the state wanted to take their children from them,” she said.

Ed Wiseman was one of the church fathers accused of abuse and feared he could lose his children.

“To them it was very difficult to understand what was happening to them that morning,” Ed Wiseman said. “Some parents and some children were told that if they didn’t cooperate they would never see their parents again or never see your children again if you don’t give us their names.”

Orchestrating the raid– then Attorney General John Easton– who defended the state’s actions.

“We were taking action to protect children from a cult of people who believe and who make it a tenet of their belief that discipline, including excessive discipline, is warranted,” Easton said in June 1984. “And I cannot let people abuse children hiding behind the guise of a church.”

Screening areas were set up at Burke Mountain where state officials planned to question the children and have them examined for abuse. But first they were bused to the courthouse in Newport where the state sought temporary custody of the kids. Instead, it was the state that would face charges of abusing its authority. Judge Frank Mahady refused the state’s request, calling the raid unconstitutional. He listed several violations including freedom of religion and due process. The state was forced to release the children and drop its case against their parents.

“Judge Mahady had the courage to do the right thing in the face of moral panic throughout the state of Vermont about the church in Island Pond,” Jean Swantko said.

Judge Mahady, who has since died, interviewed dozens of kids, found no evidence of abuse and then sent them home. He offered a scathing opinion of the state’s actions and his decision is marked on his gravestone as one of the most important decisions of his career.

The church is now known as the Twelve Tribes, which has 50 communities in nine countries. And many members still live in Island Pond.

So how are relations now– 25 years later? Find out Thursday on the Channel 3 News at 6 p.m. in part 2 of our special report.

The Teachings form the body of scriptural understanding from Eugene Spriggs to be taught and observed by every member in all of the locations. They are not meant to be for the public and are presented here for research purposes … END_OF_DOCUMENT_TOKEN_TO_BE_REPLACED