also can be found in this site: Prisionero de las 12 Tribus

and the translated to English version was provided by Twelvetribes.com and can be found here 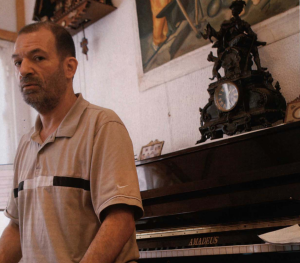 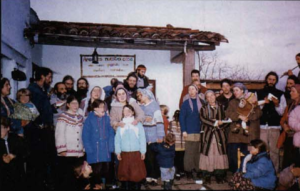 They promote the healthy life in communion with nature; but, according to a former member, it is a group that “manipulates minds and uses dictatorial methods.” After seven years under its influence Guillermo managed to leave and to take his children.

They prepare for the return of the Messiah, and until that day, they live in communities scattered throughout the world. In Spain, they have chosen Irun and San Sebastian, in Guipuzcoa, Pravia (Asturias) and Nerja (Malaga). According to some former members, the objective of this group, known as the Twelve Tribes is to gather from each tribe 12,000 children “totally pure, not contaminated from society.” Only then will the return of the Messiah happen, they say. In France they have been investigated, and in the Basque country the Commission of Culture has on the table the ballot without solving of a whole of two communities of 85 persons who fail to educate their children. The Magistrate’s court number 1 of San Sebastian keeps open an investigation since 2002.

Guillermo Altzate has lived 7 years with them in the house they have on Mount Ulia in San Sebastian. He knows the particulars of the functioning of this group, from which he was expelled without his family because he would not conform. Seventy days of separation forever opened a gap in their immediate environment.

A post of natural products in a craft fair was the bait by which they gained his confidence and that of his wife: “In that time we were in a wave of healthy diet, which was just what they were offering.” After visiting the community in which they were living in apparent perfect harmony, Guillermo and his wife sought to join the group. “Then we were approximately 40 persons including the children. The house was sort of a shack that was gradually adapting and improving. It had seven rooms, one for every family. The rest slept in a caravan or tents. The bachelors slept together in a hay loft under the roof of the building. The house had two bathrooms and a kitchen for all”. Despite the austerity of the house, Guillermo and his family were happy: “the community seemed an ideal world,” he remembers.” Every week a family was designated to wake up the others and to take charge of the breakfasts. We woke up every day half an hour before sunrise for what we called “mincha”. All group members gather in a circle before sunrise. It’s a time to said nice things in the community. After the men lifted their hands and women cover their heads with a head covering and making supplications.. 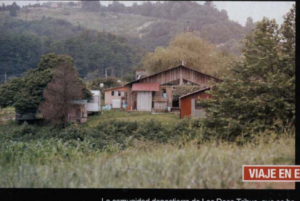 Then it was breakfast time and then a long workday. There were no timetables, so sometimes we worked through the night, says Guillermo. Work in the community consist of attending the bakery, to knead the bread and preparing jams, cookies and other natural products.” Also they worked in a small garden. The day of rest was Saturday, but free time did not include television or newspapers, or books, everything was prohibited. “There is a rule for everything, even how to eat and how they dress. Everything is insisted upon.”
Neither could they leave the residence, except in a group if it was decided to do some trip. 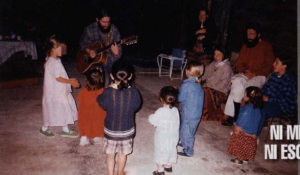 Neither doctor nor school

About fifty children aged between 6 and 17 years live in the Twelve Tribes in the Basque country. Births are natural and the males are circumcised. They neither goes to college no are provided with any type of health control. “Children do not receive gifts or toys or anything, says Guillermo Altzate. They have what is called “training”, which is like the school for children, where they learn to read and to write, the Bible and little else. The education that they receive is deplorable and has great lacks.. There are those who have not known a life outside the community”. In France Twelve Tribes has been investigated by the situation of the children. Guillermo does not speak about abuse, but he mentions that are forced into an absolute obedience to the parents.” We used a stick with which we beat them in the butt or in the hand when they did something wrong”. Despite the isolation in which they live, the community has no doctor.” The food is very healthy and the children rarely get sick, but there is only one person with knowledge of natural medicine”, says Guillermo.

Guillermo only took a month to be disillusioned: “the leaders spent the whole day speaking and discussing, while the rest did not stop working.” Once a week a ram’s horn sounded, announcing the group meeting and the beginning of what is known as a teaching. It is the moment in one of the teachers gives a lesson. He reads something that has come from America on behavior, emotions, offering a vision different from the world. All with the same objective: “they manipulate you causing you to assimilate the life (of the community) and that time does not belong to you and that it is the will of other people… that one directs your destiny. It was not acceptable  to express disagreement with the leaders, nor to confide secrets with other members. The punishment was excommunication: they did to you what we call ‘cut off from communion.’ You cannot lift your arms nor does your wife wear her head covering in moments of prayer. You are marked.”

Nobody has money in the group. They hand out anything they own to enter (the community). When he came to the brotherhood, he puts at the disposal of the leaders a small pension. It was all that he had. The money goes into a common fund. The group is financed also selling natural products in its shop of San Sebastian and in the fairs of the province. “In a weekend they earned 24,000 euros”, says Guillermo. 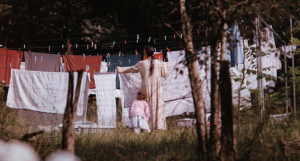 The group promotes woman’s absolute submission to man. A husband will say at any moment what he wants his wife to do. Only the leaders’ wives can give orders and only to other women. A woman can never order a man. Guillermo and his wife saw the birth of two of their three children and saw them grow there for seven years of austere and isolated life. “We had no contact with anyone other than the group. Our children could not see the grandparents either. We were told that if we consented (to the grandparents seeing the children), it was preferable to stay with them permanently to avoid contaminating the rest”. 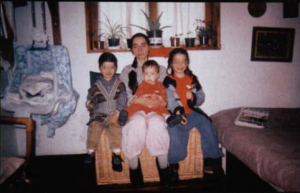 Guillermo’s wife and their children

The strict rules, the work loads and all the injustices pushed Guillermo to have confrontations with the leaders. And they drove him out: “they summoned me one morning and said to me that I had to leave the community”. He had to leave without his wife and his three children and with a garbage bag full of old clothes as the only baggage: “I rented a room in a pension and looked for work. After what for me was a sentence of 70 days in which I wrote fourteen letters to allow me to return, I summoned up the courage and I went back into the house”. To avoid scandals, the community decided to throw out the whole family. After four years of fictitious normal life, only a few months ago it became hellish again when he realized that his wife had remained psychologically hooked to the group. “One day I discovered that she had been corresponding with them all this time. I asked her to explain herself, but it was too late. She had decided to return to the community”.

The judge has given the custody of the children to Guillermo, and the mother has determined to see them once a month on Sunday afternoons. Between her family and the Twelve Tribes she prefers to continue being as a prisoner.

The Teachings form the body of scriptural understanding from Eugene Spriggs to be taught and observed by every member in all of the locations. They are not meant to be for the public and are presented here for research purposes … END_OF_DOCUMENT_TOKEN_TO_BE_REPLACED