Following is the Google translation of and link to the ungoing petition====>CLICK HERE TO GO TO PETITION
Petitioning Attn:  Office of Children of San Sebastian  Ministry of Education Basque Government 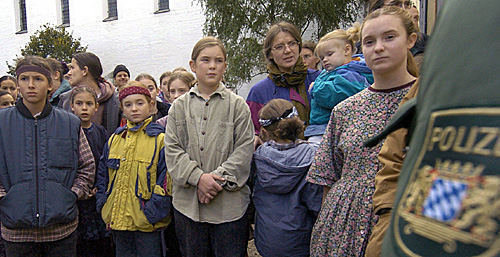 Accurate reporting of “Research Team” of the Sixth of April 17, 2015, has brought to light the existence of serious abuses against dozens of girls and children from approximately 17 years in a religious community called “The Twelve Tribes” San Sebastian (Gipuzkoa). Testimonies and videos showing that babies are “completely bandaged” to 4 months for “leaving more docile” and that children from 5-6 years, without being educated adult should perform tasks using dangerous tools like knives or motorcycle -sierras. Also, they do not receive conventional medical treatments or are vaccinated. In the report, also it finds that these children suffer physical sanctions with wooden sticks inside the hands and buttocks.

The combination of deprivation of compulsory schooling, forced labor, limited contacts with the “outside world” and intense “brainwashing” contains these children in a perverse the spiral of dependency. Countries like France, consider this messianic sect as dangerous, and in 2013 Germany withdrew custody of 40 children, while the state of New York enacted in 2004 by child labor. In Spain, Redune, the Association for the Prevention of Sectarian Handling, considered as “totalitarian and perverse with minors”, as is documented by Juantxo Dominguez, president and former members of this sect.

Given this outrageous situation of psychological and physical abuse children, and deprivation of education, and law enforcement and international child protection conventions, the Spanish authorities must also act decisively and quickly to the risk of transfer of these children to other sites sect outside Spain:
 Prioramente, the Office of Children of San Sebastian to complete their investigation and to act with the Ministry of Education of the Basque Government to protect these children, ensure their rights to education and to punish their perpetrators;
 Labour Inspectorate must act and punish this case of forced child labor;
 The Council of Ecological Agriculture and Food of the Basque Country and the towns of San Sebastian and Irun should withdraw their licenses to their “Tribal Trading” commercial network to produce and sell products such illegal conditions.

The persistence and impunity of these multiple and severe child abuse and exploitation, also in our neighborhood, is intolerable and must stop now! Sign the petition to demand a firm and swift action by the authorities because each support matters!

. ‘The Twelve Tribes’, a cult in the spotlight for child abuse that extends throughout Europe, the Sixth String 17 April 2015: http://www.lasexta.com/programas/equipo-investigacion/noticias/%E2%80%98las-doce-tribus%E2%80%99-secta-punto-mira-maltrato-infantil-que-extiende-toda-europa_2015041700406.html

. The Twelve Tribes-Child Abuse in Community Partnership for the Prevention of Sectarian Handling (Redune); April 18, 2015: http://www.redune.org.es/news/las-doce-tribus-maltrato-infantl-en-comunidad/
Juantxo interview Dominguez, president of Redune in the report of the Sixth (from 7.00)
. A tribe under suspicion, El País, March 14, 2009
http://sociedad.elpais.com/sociedad/2009/03/14/actualidad/1236985201_850215.html

Letter to
Attn:  Office of Children of San Sebastian  Ministry of Education Vasc Government
Given this outrageous situation of psychological and physical abuse children, and deprivation of education, and law enforcement and international child protection conventions, the Spanish authorities must also act so contundete

The Teachings form the body of scriptural understanding from Eugene Spriggs to be taught and observed by every member in all of the locations. They are not meant to be for the public and are presented here for research purposes … END_OF_DOCUMENT_TOKEN_TO_BE_REPLACED