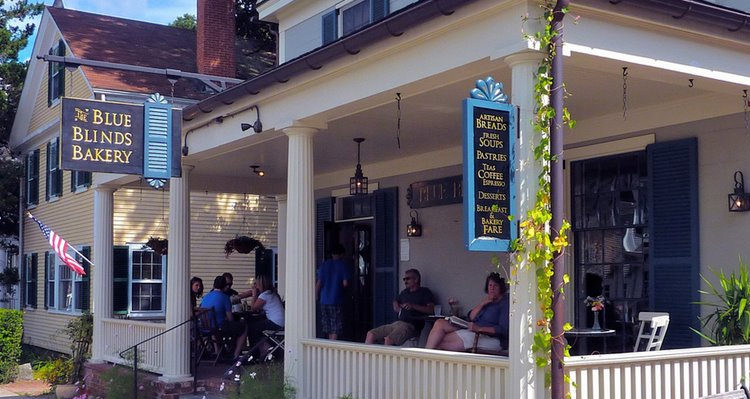 A nice little bakery in Massachusetts decides to ruin their business by posting their support for slavery and child abuse on Facebook.
What seemed to have once been a fairly nice, family-run bakery in Plymouth, Mass. decided, for some reason, that they were going to completely alienate customers and announce that they were going full-on whack job.
.

The Blue Blinds Bakery, apparently named for its blue shutters, posted the following on their Facebook page on Thursday: “we have decided to use our Facebook page as an active evangelism tool.”

And that would be great if it meant following the teachings of Jesus Christ of reaching out to the less fortunate, or handing out day out old muffins to the hungry, but it’s just a little bit weirder than that.

These folks have decided to publicly condone slavery and child abuse. You know, because the Bible says so.

On July 7th at around 7:30 am, the Bakery posted a long explanation about how the Bible says that “blacks” throughout history do better when they’re enslaved and that when they’re not, “they follow the ways of degradation.”

The caveat, added to the end of the post is what really makes it special. Ready for this? Here’s what they wrote:

Now, let’s discuss, but following the last post, we need to set some ground rules.

– Attacks on our character will not be allowed

– Attacks on others will not be allowed

And something about no tattoos.

A few days later there’s another post about “child discipline” or, as they like to call it, “child training” or,as the authorities would call it, “child abuse and child endangerment.” The post reads:

How are they disciplined? Usually a cane or a wooden stick. About 15-20 blows on the open palm or bare buttocks. Depending on the waywardness of the child, between 5-30 times a day. Some need it more than others. It can go on until they are 16 if they need it. If a child still needs discipline above that age, other measures are taken.

Great read, right? Especially when you scroll down to a post from June 30th at 7:57am that reads:

hello friends we have some great news

our children stayed up all night last night to paint the blinds on the bakery just a little bit bluer! they’re so wonderful elohim smiles radiantly on their little pink faces

Now it’s not clear how old these kids are, but children working all night painting a house can’t be a good idea at any age.

The comments are on the posts are much of what you’d expect. Plenty of people vowing never to go to the bakery and some, of course, thanks to the recent vitriol in the political arena these days, are all too eager to agree with the attitude expressed by the bake

Another commenter seems to be all too familiar with “this cult,” writing:

“Blue marks” are bruises, of course, which members of the Tribes consider evidence of exemplary parenting. “I remember constant welts on my hands, thighs, and butt,” a woman who was raised in the Tribes told

me. Children are expected to obey “on the first command,” without talking back or complaining. They are not allowed toys or bikes, and cannot engage in fantasy play. They read only the Bible and the group’s dogma. The former members I spoke to claimed most children were beaten multiple times a day, for transgressions as innocuous as forgetting to raise their hands at the dinner table and “dissipation”—the group’s term for horseplay. Responding to these descriptions, a current leader of their California communities, Wade Skinner, echoed the brochure I read in Blue Blinds. “That wouldn’t be how we portray our life,” he said, “but we do believe if you love your child, you will be diligent to discipline them, and if you hate them, you will withhold the rod.”

According to the bakery’s “About Page” they are members of “Twelve Tribes,” which according to the Wikipedia entry, “can be traced to a ministry for teenagers called the “Light Brigade” in 1972. The ministry operated out of a small coffee shop called “The Lighthouse” within the home of Gene Spriggs and his wife Marsha.

In addition, the “Tribe” has been involved in several controversies involving, child labor, race, and homeschooling.

The Teachings form the body of scriptural understanding from Eugene Spriggs to be taught and observed by every member in all of the locations. They are not meant to be for the public and are presented here for research purposes … END_OF_DOCUMENT_TOKEN_TO_BE_REPLACED