Two mountains lie forever spooning each other against the encrusted cluster of little lit houses below me. My 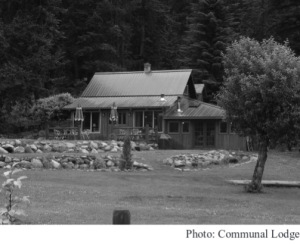 friend Parizeau and I sit high on slabs of rock in Gyro Park, pounding back Goldschlager and smoking. I had managed to arrange an interview with a member of the

Twelve Tribes, an obscure religious cult in Nelson, BC.
Using a cell phone for light, we conjured questions to
ask in the morning. Nelson is a place where “No Dog” symbols are painted on the sidewalks downtown and cars always stop, even though the many crosswalks are void of
traffic lights. A city that has the population of a town
and that houses The Preserved Seed restaurant. Owned
and operated by the Twelve Tribes cult, the Preserved
Seed is an enchanting place with kickass key lime
squares and a Tudor-type tavern feel. In their restaurant
I was to conduct my succinct n’ juicey interview.
Witha post-party head full of dreams, I woke
to the sound of screaming children and ill-tempered
storms. It was 9:30 am and the interview was set for
10:00. I got ready on the flash (Parizeau to boot), and
we made it to the Preserved Seed on the nose, damp
and drowsy. We were welcomed warmly when I asked
for Devaq, the man I was to interview on behalf of the
bearded men and oatmeal women. He met us promptly
with a strong handshake and pleasant manner. We sat
at a charming table and were served lovely carob mint
matés. I told him that I was from a collective zine that
was interested in alternative living, and the interview

commenced.
Kazine:
When did your tribe arrive in Nelson?
Devaq:
In 2000. The restaurant was established in 2001.
Kazine:
How many tribes are there and where are
some located?
Devaq:
Fifty, with twenty-five in North America and four in Canada. The ones in Chilliwack and Courtenay have restaurants with the name The Preserved Seed
Kazine:
Do all groups have restaurants?
Devaq: Most do, and those that don’t are working on getting one.
Kazine:
Where in the world are the other tribes?
Devaq: Brazil, USA, Spain, England, France,Germany, Argentina, Australia and Japan.
Kazine:
Which country is considered the Motherland?
Devaq:
The movement was started by Gene and Marsha Sprigs in Chattanooga, Tennessee in 1971.
Gene was part of the Jesus movement of the 60s. He moved to Tennessee and met his wife and they opened a restaurant called The Yellow Delhi on the University of Tennessee campus. Gene had so much love for Jesus and became inspired by him. When Gene and Marsha married, they would have friends over to discuss Jesus. They would call the discussions ‘wrap sessions’ and their friends would come from all over. Then one day when it was time for their friends to leave, their friends said, “I wish I didn’t have to leave,” and, Gene and Marsha said “You know, you don’t have to leave, you can just stay.” They did, and more friends from all over came, and then, through networks, started groups all over.
Kazine:
Can anybody join?
Devaq:
Anybody can join.
Kazine:
What are your guiding morals or rules?
Devaq:
Yahshua, (The Twelve Tribe’s name for Jesus) said “Don’t worry about what you eat and wear. Give up 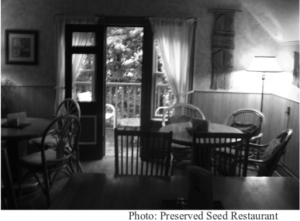 The Teachings form the body of scriptural understanding from Eugene Spriggs to be taught and observed by every member in all of the locations. They are not meant to be for the public and are presented here for research purposes … END_OF_DOCUMENT_TOKEN_TO_BE_REPLACED