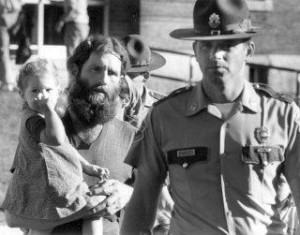 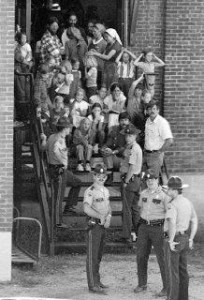 Vermont raid had similar conclusion to Texas case
In this June 22, 1984, file photo, parents and children are in police custody in Newport, Vt., in June 1984, after the Northeast Kingdom Community Church was raided in the early morning by state officials alleging child abuse. Inset: Member of the Northeast Kingdom Community Church are escorted out of court by state police in Newport. People involved in the 1984 seizure of more than 100 children say there are some similarities between the Island Pond case and the current case in Texas in which hundreds of children were taken from their parents amid allegations of sexual abuse. In both cases the courts returned the children to their parents.

MONTPELIER, Vt. — Before dawn on June 22, 1984, 90 Vermont State Police troopers and 50 social workers descended on the Island Pond homes of about 400 people belonging to the Northeast Kingdom Community Church to investigate allegations of child abuse.

Authorities had received reports children were being beaten, sometimes with sticks, as part of the strict discipline imposed by church parents. The 112 children taken into custody were to be examined for abuse and if none were found they were to be returned to their parents — if the parents agreed to cooperate with the state.

But within hours a judge returned the children to their parents, calling the state’s effort a “grossly unlawful scheme.”

While there are many differences between the Vermont raid on Island Pond and the decision by Texas officials to take into custody 430 children amid allegations underage girls were being forced to marry older men, there are many similarities, said one of the former officials involved in the Vermont case.

“It’s very apparent from these two cases that at least two courts are looking for specific, direct information regarding each family unit,” said Washington attorney John Easton, who in 1984 was the Vermont attorney general and involved in the decision to launch the Island Pond raid. “To remove a child from a family is a high burden. The courts are going to be looking for a substantial amount of proof” of abuse.

On April 3, Texas Child Protective Services removed all the children from the Yearning For Zion Ranch run by the Fundamentalist Church of Jesus Christ of Latter Day Saints after a 16-year-old mother claimed she was being abused by her middle-age husband. The state charged all the children were at risk because church teachings pushed underage girls into marriage and sex.

Last month, The Texas Third Court of Appeals said the state went too far. The Texas Supreme Court has since upheld the decision and almost all the children have been returned to their parents. Church leaders are promising not to sanction underage marriages.

“Lawyers who practice family law will know to say the burden is on the state in these cases,” Teachout said. “The underlying principal is whenever you take a child away from his parents, that you do so when there is serious risk of abuse.”

The Northeast Kingdom Community Church took root in Island Pond, a small, rural community in northern Vermont, in the summer of 1978 after a resident invited a church leader to town. Almost immediately, the Island Pond group tripled in size from its 20 original members to 60. The church is now known as the Twelve Tribes, which has 50 communities in nine countries and about 3,500 members.

From the beginning the relationship between Island Pond in a part of Vermont called the Northeast Kingdom and the bearded men and women in kerchiefs was uneasy. In some circles the word “cult” was used to describe it and state officials began to hear reports of physical abuse of children.

So the state decided to act, got an order from a judge to seize the children and secretly assembled the police and social workers, said Easton, the former attorney general.

After they were taken, Judge Frank Mahady, who has since died, interviewed them and sent them home. His scathing opinion is still available on the church’s Web site.

James Richardson, a sociologist at the University of Nevada, Reno, who has studied efforts by governments to control minority faiths, said the Texas and Vermont cases were among almost two dozen similar cases scholars have identified around the world.

He said in many cases organizations get caught up in investigating allegations of child abuse and they overreach. In Vermont and Texas the efforts were stopped by the judge.

“Concern about children trumps all other considerations in most western nations, and usually overcomes even religious freedom concerns,” Richardson said in an e-mail.

Even from the perspective of 24 years, Easton said there wasn’t much he would have done differently.

“We were put in a difficult position. We had rather serious allegations from people who had directly observed activities inside the church,” Easton said. “To not act would have been irresponsible.”

In 1984 Jean Swantko was a public defender assigned to represent the people of the Island Pond church. Now she’s a member.

She said many of the children seized in 1984 are now adults raising their own children in the church.

“Now, 24 years after the raid they are between 24 and 42. Most of them are still in the community. They are taking on the faith of their parents,” Swantko said. “You can judge a tree by its fruit.”

One Comment On “Vermont raid had similar conclusion to Texas case”

The Teachings form the body of scriptural understanding from Eugene Spriggs to be taught and observed by every member in all of the locations. They are not meant to be for the public and are presented here for research purposes … END_OF_DOCUMENT_TOKEN_TO_BE_REPLACED