News – When the Sleepless Goat closed in Kingston, many were upset; the downtown coffee collective was always thought of as an inclusive and inviting space and many were sad to see it go. Luckily, a new deli is hoping to bring those same types of aspects to their own space and maybe even attract some of the Goat’s old customers.

The Lil’ Yellow Deli, plans to open in Kingston in June and one of its owners, Jason Shinduke, hopes it will bring love and acceptance to all those who frequent the establishment.

“We are a group of families that are working together,” he explained. “We are part of the Twelve Tribes and our focus and goal is love. We want to express love and we want to manifest love. We care and we want to have care for each other and have respect; we want to bring that to people through the restaurant.”

The Twelve Tribes network of communities has been around for almost 45 years. The groups in Canada were mainly in British Columbia and Alberta until a few years ago when they travelled to Kingston for a Tall Ships event. They made contacts in the area and soon members fell in love with the Limestone City and started their own community.

Shinduke is part of that community and lives with two families and a bunch of single members on a farm off of Abbey Dawn Road in Kingston.

“In our community, we believe in traditional, basic things. We believe in the bible, we don’t have any alternative text, but we want to get back to the roots of a real simple faith that produces an action,” he said.  “That action is an expression of the creator’s heart to you in a way that you can tangibly feel it. We focus more on action than words and we work and grow together.”

When Twelve Tribes groups originally formed, they purchased a restaurant to help them connect and grow together. They needed to make some money, but they also wanted to do it together.

“The very first café we had was called the Yellow Deli. A restaurant was the perfect place for the community to be together because anyone can learn to make a sandwich or wash dishes and they could all work together,” said Shinduke. “The materials were sourced from wherever and the paint was yellow so the name came from that. It symbolizes our resourcefulness, that close to the ground connection and remembering what life is all about.”

In Kingston, The Lil’ Yellow Deli, located at 647 Princess Street, is still under construction, but everything inside will be custom built with repurposed wood and a natural feel. The menu will also be very simple with soups, salads and sandwiches that are locally sourced.

“The food and drinks at the café will eventually be sourced from our farm, but not right now because we are just getting started,” said Shinduke. “Everything we do is homemade. We make all of our own breads and soups and we make a special South American tea. Our own fingerprint is on a lot of what we do.”

Shinduke hopes that the space will appeal to Queen’s students, especially since the deli is across the street from a major residence, and the residents of Kingston too.

“Our goal in the restaurant is for people to be able to come in and find a place where they are very comfortable, where people are accepted and taken care of and nourished and they feel good about it,” he said. “It is not a high-pressure business system and we aren’t doing it for the money. Our goal is more of an expression of love.”

This restaurant is run by a fear based religious cult. I will not support them. https://psmag.com/children-of-the-tribes-5b95e96c4bfa#.fl3s9vdgi http://www.twelvetribes-ex.org/whyileft.htm 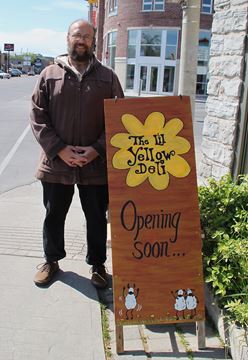 Jason Shinduke is a member of the Twelve Tribes community in Kingston.

The Teachings form the body of scriptural understanding from Eugene Spriggs to be taught and observed by every member in all of the locations. They are not meant to be for the public and are presented here for research purposes … END_OF_DOCUMENT_TOKEN_TO_BE_REPLACED